So the GAIA satellite has been quietly plugging away, as it was designed to do, getting the astrometric distances to a billion stars. I played some with DR1, which mostly needed Hipparchos as a first epoch to get distances. Nice but nothing quite as amazing as a billion stars.

I heard a talk by Adam Riess at the AAS this winter on how they got astrometric distances to the long-period Cepheids in the Milky Way with much finagling on Hubble.Yeah. no worries. Now you can simply get the astrometric distance to the Magellanic clouds. The main uncertainty in the cosmic distance scale then comes from the lack of overlap between Cepheid distances and Supernovae.

Go figure. Three steps and that is the distances throughout the entire known Universe! We've come a long way! (literally!).

So why is this important? Because we're seeing the first pebbles shift in what promises to be a bit of a landslide in cosmology. Maybe. It's early. 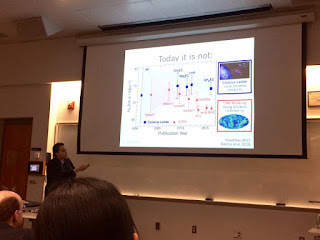 Sangeeta Malhora posted a picture of a talk reviewing the tension between the distance scale(s) (there are different methods) and the Cosmic Microwave Background. This is interesting. Cool slide too. Totallywant to steal it from  Reachel Beaton who is giving the talk here. The distance scale is getting a different Hubble constant than the CMB is... that's...weird.

But some of the uncertainty comes from the very first step. GAIA is set to squash that first step's uncertainty.

I also have a just completely crazy idea (that just might work) for GAIA data as well. And maybe some ideas for student projects as well.