This week, the astronomical community heard that the James Webb Space Telescope was delayed by a substantial amount of time. More importantly, the deadline for proposals was also delayed by a good 11 months.Considering that most astronomers submit to HST like this: 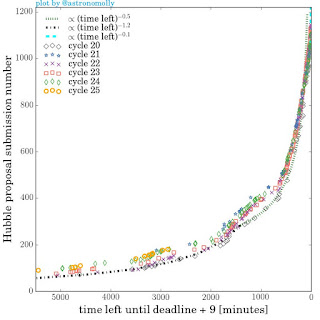 One could assume only a few people really gotten started and not much time had been wasted anyway...

Given the fact that I am typically one of those people that submits a first version at the beginning of the x-axis of this plot...I... wasn't happy. Neither were most of my collegues who pretty much all had been working hard on science cases and teaching themselves how to talk JWST instrument for the last few weeks.

Which brings me to the --according to Bill Keel-- uncharacteristicly Zen tweet of mine. Delays in JWST remind me of one of the best talks on instrument development I have ever heard during "400 years of the telescope" at the ESA's ESTEC by Bob O'dell: 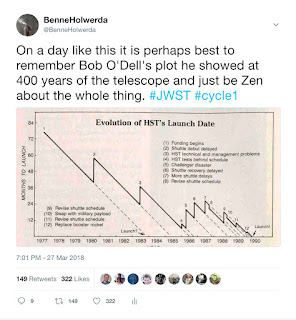 The x-axis is a decade and a half. There are 9 separate delays in this plot. All of them genuinely unforseen issues with Hubble. The mirror deformation isn't even in here! So if you are building a space telescope, a Zen attitude helps. Probably. 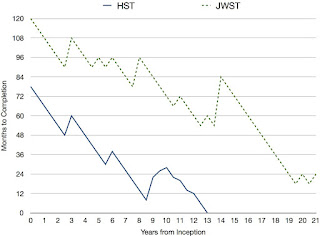 The delays for both were helpfully graphed and frankly...given the fact that a servicing mssion is impossible, we are par for the course. It is what it is. I know for certain that STSCI made that difficult decision as soon as they could. Proposals for time are taken very seriously.

At least I got my most popular tweet of all time (K. Mack mid-range!) out of it.

Posted by Benne Holwerda at 5:45 PM