I spent all of last week in Cape Town at the PHISCC 2016 meeting. And then the LADUMA team meeting. Things are shaping up nicely. Source finding in HI cubes is maturing, the data-rates don't look scary anymore (they're still the same, we're just not wimpering) and we did another LADUMA outreach morning. This was a huge hit back in 2014 when PHISCC was last in Cape Town and the first time I was going to participate.

Sarah managed to get hold of a list of schools to contact. And set up the logistics (yay Sarah). We heavily depend on the South Africans for most of the logistics (they have cars...)

I did notice an inherent issue that is impossible to correct for. All the poorer schools will have a poorer response to an offer for a bunch of scientists to come by and talk opportunities. I'm sure Sarah noticed. Actually I think she pointed it out. There is more turnover in staff, fewer people manning the phones etc so we often end up going to schools that are...for a lack of a better word...posh.

These private schools are amazing and quite a number of bright kids will turn out to be scientists later in life. It was a great experience talking to the classes. And yet...how do we get to more schools?!?! 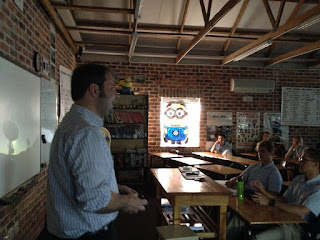 We need to figure that out. Without sending every LADUMA team member on a days long trek or something. Something clever to let all the kids in South Africa know their country is up to someth amazing science & engineering and they all can be part of it. Some thought required. I'll start by seeing about translating those UNAWE radio astronomy booklets in Xhosa and Afrikaans.
Posted by Benne Holwerda at 1:27 PM