So for this past semester I've been diligently toggling my time. This is in part thanks to Matt Kenworthy, in part a desire to track what I've done so I can show it and part a way to just focus on a single thing.

I did not work at 100% efficiency at all times. Obviously. Sometimes these are hours where the tv was on and I was picking at a laptop working on a proposal or something. Honestly I am trying to get rid of "work" times like that. Either veg or not.

That being said. I was a hectic first semester with much last minute improvisation (not my favorite) and making up for earlier mistakes (even less my favorite). Yet is broke down like this: 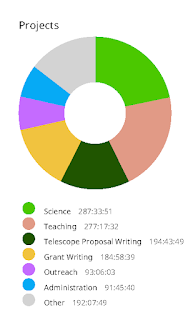 Which is I have to say... not too bad. But keep in mind that it was ~60 hr a week. And it wasn't like I left toggl running and then just "kept idle time". That is a lot of hours worked. And a lot on other/admin. But note the 25% on grant/telescope proposal writing.

Yeah that eats up a lot of my time already. To be more efficient, I strongly suggest brain dumping the idea as soon as the call comes out and refine only in the week leading up. This is probably a bit skewed since all the major deadlines were in this semester (think HUBBLE!) and the HST cycle was 1.5 years so I threw everything I had at it. Still. A lot of time... 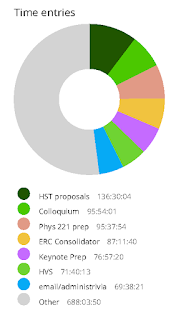 This gives a good idea for the time individual projects took. Note HST clocking in at 136 hours... but given I put in 8...that is 17 hours per proposal. Most of them re-writes/polishes but it gives a good idea how much time it takes. Really a week for one. At least...
That 76 hour Keynote? A public talk I gave. The email is a low estimate since I count that as a "everything" entry but I do lots of reply/triage on the bus while not toggling that.

All in all ok but must have a critical look as to improve efficiency or just not do stuff since 60hr/week is too much. And inherently inefficient.
Posted by Benne Holwerda at 1:19 PM