IAUS321 - the outskirts of galaxies

It has been a week and I have collated some thoughts on the IAU symposium 321 on the outskirts of galaxies. There had been some buzz already at PHISCC but I had somewhat underestimated how big or information-filled it was going to be. I had a full brain by Tuesday. And SO many people to chat to. It felt like one run-on sentence. Drink from the fire hose & lean into it....

The organization was impressive. They had a twitter presence. An excellent website and an outstanding program and site. Toledo is a lovely city. I had been there before for an ESA science workshop a few years back. So I knew where the yummy marzipan could be found. 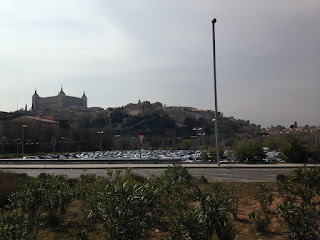 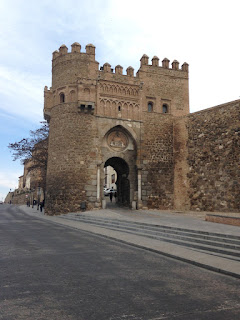 This is on my way from the hotel to the venue. Not a Game of Thrones set...actual battlements.
I tried to get to grips of the high-view takeaways and to live-tweet as much as possible (to the great annoyance of a FB friend). Things I took away as more general impressions were:

Streams - they are indeed everywhere. 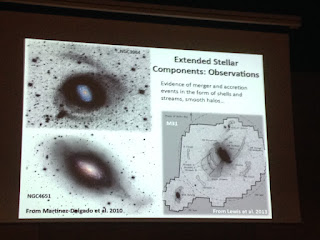 both from resolved stellar observations (like the GHOSTS HST survey I'm involved in) and integrated light, often using small telescopes or the DRAGONFLY telephoto-lens array.

Streams and models -- We keep seeing streams around nearby galaxies with small telescopes. However, these were not the streams we were looking for...the streams predited by simulations are much fainter. 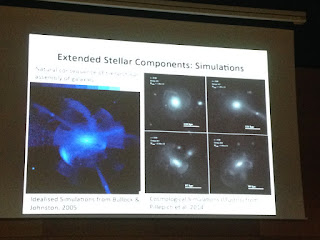 Models on the left, observations on the right. How to compare these?

The issue remains how to quantitatively compare the two and how to obtain proper statistics (well the ongoing surveys will take care of that...).

The DRAGONFLY array is steadily adding deep imaging and results on stellar haloes. They find very small stellar halo fractions for anything smaller than the Milky Way. It remains to be seen if this is really true. I suspect some more results on nearby galaxies (like M101) are needed. We have a GHOSTS program on this galaxy. Let's see how integrated light and HST star counts compare.

The most convincing result was on NGC 2841 how there is stars throughout the HI gas disk. interesting... 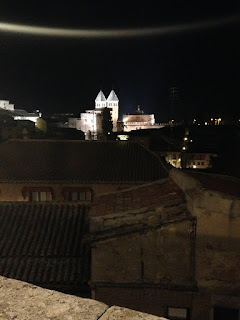 Wednesday was busy with the result of my Bachelors students' results. They counted M-dwarfs in the Milky Way and we all published this result in MNRAS. And my phone died...so I was incommunicado... It went pretty well.

Thursday was my talk. I think it went well... I offered to be everyone's Dust Weatherman. And showed my results on dust in the outskirts of galaxies. Yes there is some! Galactic cirrus is not all that's bothering us in the outskirts!


The next morning was the return Home. at Way-too-early-in-the-morning. It had been fun. I had caught up with a bunch of friends and collegues, ate a lot of Spanish deer and pork (nom). And some ideas for future HST projects. Brain full but fizzing.

Posted by Benne Holwerda at 2:28 PM